Unfortunately getting old can come with a stigma. Many people try to delay the inevitable with regular exercise, healthy diet and a strict skincare regime, but time stops for no one.

Ageing can also be a problem for countries. Many developed markets (DMs) are starting to struggle with ageing populations and their associated social and economic issues.

Looking forward, it could be a problem even for the emerging world, which faces a slowdown in the growth of its ‘working-age’ population over the next 30 years.

Emerging market demographics ‘in focus’ – implications for growth and the rise of the global middle class is the first of three research papers that seek to examine the nature and consequences of long-term demographic change in the major emerging countries and regions.

For example, it examines whether the number of actively-engaged workers in a labour force is more important than simplistic measures of the working-age population; and how rising education levels in poorer countries could help offset the damaging economic effects of fewer workers.

In society we need to guard against ageism. That’s also true when thinking about economic growth.

In society we need to guard against ageism. That’s also true when thinking about economic growth.

Demography is important. As well as affecting the total size of an economy through the number of people and workers, a shifting demographic profile has the potential to influence economies in other ways – via investment levels, interest rates and inflation, for example.

Across major EMs the boost from previously rising labour forces is fading fast. Over the next three decades, almost all EMs can expect a falling contribution to potential growth from labour, with some countries facing a drag on growth as the number of workers falls.

Only developing Asia (excluding China and Thailand), the Middle East and Africa will enjoy any meaningful gains from their labour force.

Chart – Only Nigeria and Pakistan may continue to reap ‘demographic dividends’* 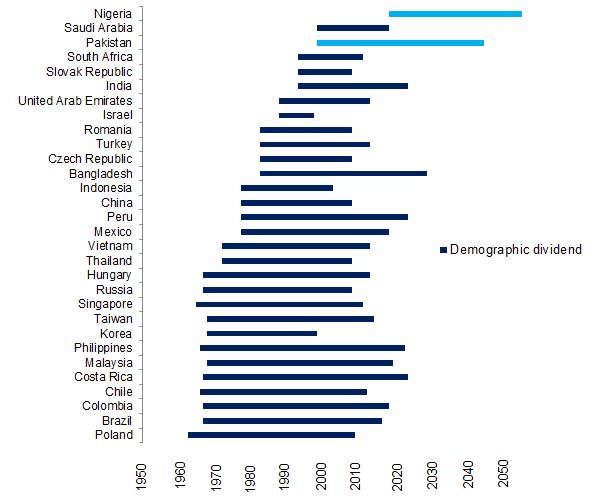 *Note: demographic dividend over time period starts when dependency ratio falls and ends when it rises

….but demographics are not destiny

However, there are important caveats when considering demographic headwinds.

The application of simplistic and outdated definitions of ‘working-age’ populations – often taken as 15-64 – fails to capture rising labour force participation for those aged 60-70 (because of rising life expectancy and later retirement).

An ‘older’ workforce affects the calculation of dependency ratios. On a per-worker basis, dependency ratios continue to fall over the next three decades in India – more workers support fewer retirees – while ratios in emerging Asia and Latin America are little changed.

Human capital – the economic value of a worker’s skills and experience – has room to grow as more people stay in formal education for longer. This is likely to offset the drag from having fewer workers (or from a slowing pace of workforce growth).

Lower-income countries will benefit more. For example, many countries in Africa, and to a lesser extent India, should benefit from both more workers and a more capable workforce. China could still offset fewer workers with better-educated ones.

… as is the machinery and equipment workers have

The building blocks of long-term economic growth also include productivity and capital investment (i.e. the buildings, equipment and software available to workers, plus how efficiently workers can combine them with their time).

Generally speaking, studies suggest that older workforces are somewhat less dynamic and there is a risk that an ageing population leads to weaker productivity.

Some of this is indirect. For example, tax policies could become more austere as resources are diverted to rising healthcare costs; older people tend to save less and this could push interest rates higher. In both cases, growth suffers.

On the other hand, an ageing workforce could spur firms to invest more (capital deepening) in productivity-enhancing technology such as industrial robots. You have to be careful not to be overly pessimistic too.

Even with a less favourable demographic outlook, emerging markets still have considerable infrastructure needs which help to lay a solid foundation for future growth.

We expect economic growth in emerging markets to require a large increase in all types of capital investment – in buildings, plant and machinery, vehicles, software and other forms of information technology – on a per-worker basis. This should offset any drag from having fewer workers.

Finally, even with some slowing of trend growth, emerging markets should account for much more of the centre of gravity of global consumption as well as growth of the global middle class.

For example, the Chinese market may have overtaken the US by 2040; by 2050, it could be some 20% bigger than its US counterpart.

All of which suggests that, while we should be mindful of the demographic challenges ahead, demographics form just one part of EM’s destiny.